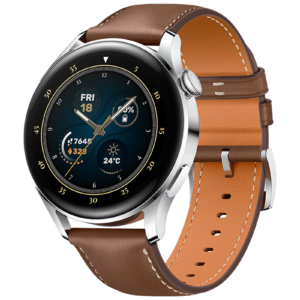 Huawei Watch 3 Active
Back to products 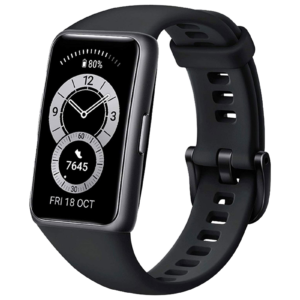 In terms of design, the Huawei Watch 3 is a big departure from the chunky Watch 2, instead bearing more than a passing resemblance to the Watch GT with a large, glossy face, minimal bezels, and glass that curves at the edges to meet the case.

The Huawei Watch 3 active edition (tested here) has a 46mm case, and is supplied with a black silicone band, which isn’t quite as soft as that of the Apple Watch 6, but still comfortable. The band has quick-release pins so you can easily switch it to something a little more stylish, and is secured with a conventional buckle rather than the loop-and-tang style fastening that’s becoming increasingly popular with smartwatches and fitness trackers.

The Watch 3 has just two physical controls: a small button the serves to navigate backwards through menus or return you to the home screen, and a crown that you can press to select options and apps, or turn to scroll through text and menus – a feature that was lacking on the Huawei Watch 2.

It’s a system that works well, and scrolling with the crown is smooth and responsive. It’s also just about large enough to make typing feasible with the Watch 3’s on-screen keyboard, though it’s still pretty fiddly – you’ll be thankful for its autocorrect feature.

The Watch 3’s standout feature is its 1.43in AMOLED display, which is crisp and vibrant, allowing you to see plenty of data or text on screen at once. There’s a huge array of watch faces to choose from in the Huawei Health app, many of which are animated to really show off the display, though it’s worth bearing in mind that most of these are paid-for, and very considerably in price.

The Huawei Watch 3 is heavily fitness-focused (which we’ll discuss in more detail shortly), but it also has a good range of tools that make it a practical everyday smartwatch, particularly if you have an Android phone and an Apple Watch is out of the question.

With an eSim installed you can make and receive calls, play music, and download apps without an active Bluetooth connection to your phone (ideal for working out without your handset), but even without that, there’s a lot to appreciate – especially when it comes to time-saving.

For example, you’ll receive detailed app notifications on the watch’s face, eliminating the need to open the relevant app on your phone in many cases, and you can accept or mute calls with hand gestures that make use of the watch’s accelerometer; clench your fist then release it to accept the call, or turn your wrist sideways to mute it.

You can also control calls using Huawei’s voice assistant, Celia (which you can access by saying ‘Hey Celia’). This allows you to perform simple searches too, and control connected devices. Like the operating system itself, it’s not yet as developed as Google Assistant, Siri or Amazon Alexa, but there’s certainly potential and we look forward to seeing where Huawei takes it in future.

Another of our favourite features was the ability to make quick voice recordings through the Notes app, so you can make a record of anything that crosses your mind in a few seconds without using the watch’s on-screen keyboard.

If you want to download additional apps, however, you’ll find Huawei’s AppGallery pretty empty. This is no surprise for a watch running a brand new operating system, and hopefully it’ll soon be filled out with additional tools for the Watch 3. It would particularly benefit from third-party apps from the likes of Spotify for music streaming, and Strava for running and cycling.

The pre-installed apps have been carefully curated though, and include some particularly welcome safety features. Like many modern smartwatches, bike computers, and other fitness-tracking devices, the Huawei Watch 3 can alert an emergency contact if it detects a sudden impact, indicating that you’ve taken a fall. This will start a countdown, which you can dismiss to cancel the alert.

You can also alert the emergency services automatically by tapping the crown button five times in succession – a feature similar to the emergency alert on the Garmin Lily, which helps provide peace of mind if you’re out alone.

The Huawei Watch 3’s main focus is fitness tracking. For everyday motivation, there’s a set of Apple Watch style rings that you should aim to complete before bedtime. You’ll also be prompted to get up and move periodically with the typical inactivity alerts (complete with a nice little animation of a man having a stretch).

For workouts, there’s a comprehensive selection of indoor and outdoor activities (including a triathlon mode to track swimming, cycling and running stages in one go), though there’s no need to scroll through the entire each list each time, as you can customise the menu to prioritise those you use most frequently.

The Watch 3 is charged via a magnetic puck, very much like an Apple Watch 6. Unlike Apple’s chargers, however, Huawei’s has a USB-A connector rather than USB-C.

Huawei estimates that the watch will last around 14 days in power-saving mode, and three days in smartwatch mode with all features enabled (again, much like the Apple Watch 6), though in our tests we found it came up a little short, lasting more like two and a half days when recording a daily workout in addition to everyday steps and heart rate.

The watch connects to the Huawei Health app, which is available for iOS, Android, and comes preinstalled with HarmonyOS. Connecting the watch is a simple matter of creating an account (if you don’t already have one), entering a PIN from the watch face for verification, and granting it the necessary permissions.

We tested the Watch 3 with both a Huawei P40 Pro, and a Fairphone 3 Plus running Android 10. Connecting on the Huawei handset went without a hitch, but we found that the Android app didn’t list the new smartwatch and couldn’t locate it. If this happens, the company advises updating the Huawei health app in AppGallery from your phone to solve the problem. 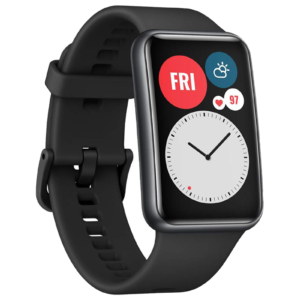 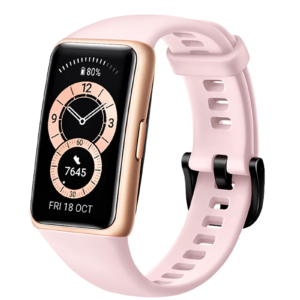 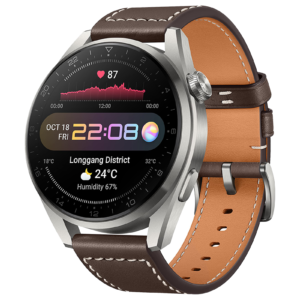 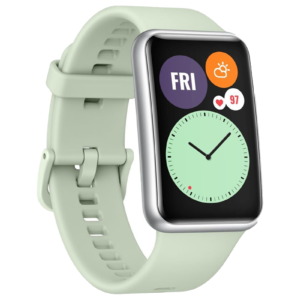 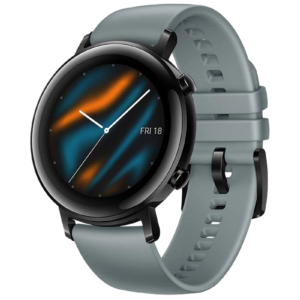 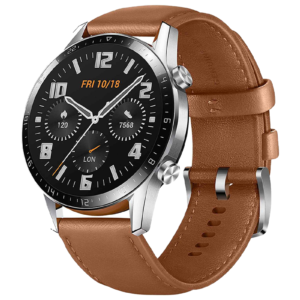 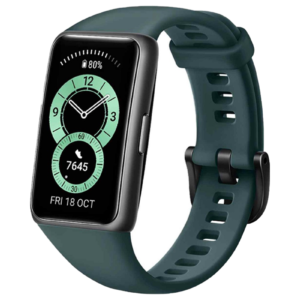